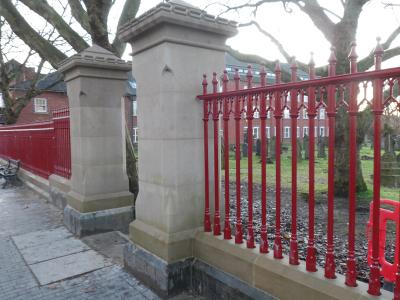 As an important part of the Restoration Work to the Cemeteries, new red railings have been erected around the Warstone Lane Cemetery (the original railings were removed as part of WW2 War effort – and later thrown into the north sea as being made of the wrong kind of metal!)

But queries soon came pouring into The Hockley Flyer asking: “Is that the undercoat” and “What colour will they be when finished.”

The only specification in the planning documents stated in two instances::”Finished in Brunswick Geen” So – Why Red?

The Hockley Flyer contacted Josie Wall – who is in charge of the Cemeteries Restoration Project, who quickly responded as follows: ‘There was a colour survey done by the landscape architects and they concluded that red was the right original colour – and when they ‘found’ a fragment of the ‘original’ railings when excavating near the boundery wall, this confirmed their conclusions.” 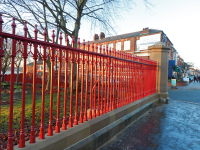 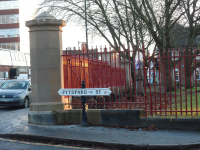 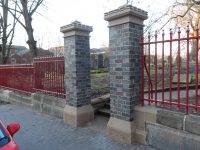 So – red is the final colour.

It’s called ‘Solemn Red’ and is thought to be close to the original colour from 1848. The inspiration for that is thought to have been the railings which Pugin designed for the Houses of Parliament’. 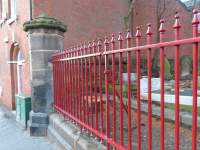 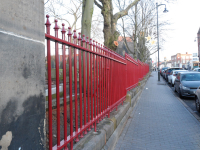 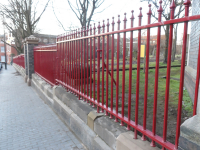