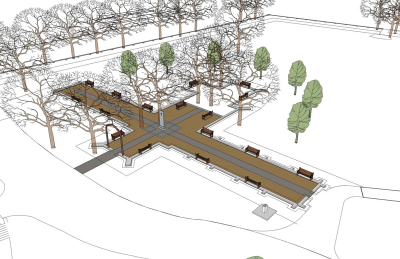 Plans have been submitted to transform Warstone Lane and Key Hill cemeteries, both in the Jewellery Quarter. The plans include a series of long-awaited improvements to the cemeteries, which have a long history in the City – Key Hill was created in 1836 while Warstone Lane dates from 1847.

Proposals for Warstone include re-installing historical boundary railings, stone piers and entrance gates, renovation of catacomb stonework, and improving the setting of the cemetery lodge with railings and resurfacing. At Key Hill, the council also proposes to resurface pathways, improve drainage, renovation of catacomb stonework, a new safety balustrade and tree clearance.

Both cemeteries are listed on the Register of Parks and Gardens of Special Historic Interest.

Central to the scheme will be a new ‘garden of memory and reflection’ on the spot where the St Michael and All Angels chapel stood before it was demolished in 1958 after being damaged by bombs in World War II. The Council states: “This area is free from burial plots though there are underground catacomb chambers. In more recent years it has become a garden area with lawn, ornamental shrubs, trees and some seating.

The proposal involves retracing the outline of the chapel on the ground plane with a low raised stone plinth, areas of paving and showing the rhythm of the windows with seating. Central to the design is a tall memorial stone on a low stone pedestal, engraved with historical images and descriptions. The former front entrance archway is replicated in size and scale by a new Corten steel arch. 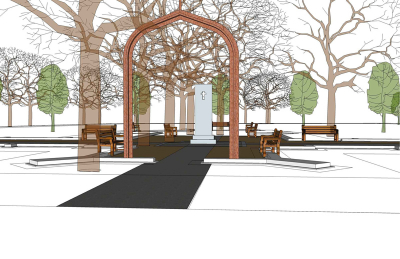 The arch can also be seen from key locations within the site even from the Icknield Road drive, drawing visitors to the garden and giving them a sense of understanding about the historical heritage and layout.”

A campaign group, the Friends of Key Hill & Warstone Lane Cemeteries, have long fought to have both cemeteries restored, (and before that – The Hockley Flyer since 1981!) – The boundary railings were removed as part of WW2 collection of metal towards the War Effort, but after being found ‘unsuitable’, allegedly dumped in the North Sea.