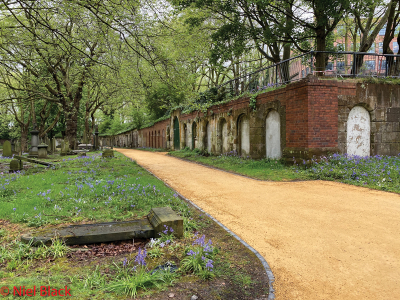 A £2.3 million restoration to Key Hill Cemetery and Warstone Lane Cemetery is near completion.

The plans for this restoration work were first announced in The Hockley Flyer No. 360 July 2015.

Before and during those four years a great deal of voluntary work has been carried out by the ‘Friends of Key Hill Cemetery and Warstone Lane Cemetery’ in clearing graves and pathways and helping people to find family graves etc and in acquiring funds to restore them.

This work commenced some years ago when Birmingham City Council ‘toppled over’ many headstones which failed a ‘safety test’ and many broke into small pieces, some of which have been patiently pieced together by the ‘Friends’, especially Colin Giles. 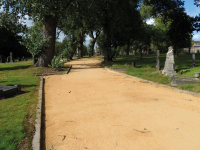 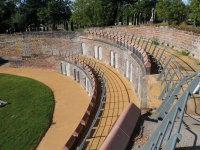 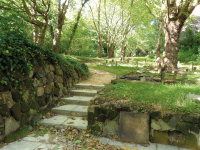 This excellent work will continue and it should be stressed that although there is an increasing number of people offering guided tours of the cemeteries, all money made from the ‘Friends’ tours is the only instance when the money raised actually pays for the restoration of the broken headstones.

Other remedial work has included the rebuilding of the Key Hill Cemetery wall by Wates Construction Co. and in 2009 the repair of the gates and piers on Icknield Street at the main entrance and clearing the pathways.

This latest work is only for the restoration of the cemeteries – not the graves, and funded through a partnership between Birmingham City Council, The National Lottery Heritage Fund and the Jewellery Quarter Development Trust, and existing voluntary organisations, will see the cemeteries, which date back to the nineteenth century, have extensive restoration work undertaken to the catacombs, major boundaries and surrounding footpaths.

The restoration works took part in two phases. The first phase was the railings and entrance piers with new gates, then the second phase was the landscaping with new paths and the construction of the Warstone Lane Cemetery Chapel Footprint site. 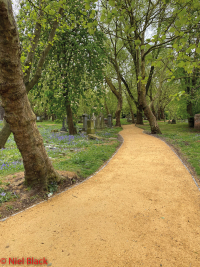 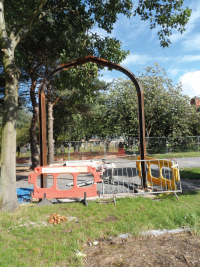 Despite the Coronavirus lockdown, the cemeteries have remained open as they are no longer used as burial grounds, enabling contractors to continue with restoration work to the pathways which were very neglected.

Most of the blue bricks used to edge the paths have been reclaimed and work completed to the pathways themselves, using Breedon gravel, chosen as being the most suitable material as Breedon gravel is self-binding.

This is because it is made of clay which will stop the gravel from washing away and blocking the drains. The colour chosen is rather vivid, but this colour will gradually mellow until it blends with stonework in the cemeteries.

This £2.3 million restoration to Key Hill and Warstone Lane cemeteries is funded through a partnership between Birmingham City Council, The National Lottery Heritage Fund and the Jewellery Quarter Development Trust. The works will include extensive restoration work undertaken to the catacombs, boundary walls, footpaths, drainage and landscaping.