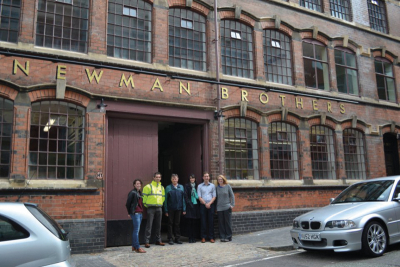 In 1989, I was approached by one of our two local ‘bobbies’ at that time, PC John Caves, asking if I could intervene on behalf of an elderly lady, Ms Green, who owned the Newman Coffin Works in Fleet Street who was allegedly being ‘harassed’ by the ‘powers that be’ to make the premises secure and warned that if anyone broke in and vandalised the property, or worse, she would be held personally liable. She was so scared she had taken to sleeping on the premises and John was worried for her safety.

After contacting the ‘right’ people the harassment ceased and Marie made the Conservation Committee, of which she was a member, aware that there was something ‘rather special’ about this building and its history which was worth saving, and a ‘visit’ by the Committee was arranged.

On this initial visit the building was found to be fascinating but rather ‘spooky’ – everything was left around as if the workforce had just gone to the canteen for a cup of tea and were due back at any time. The sewing machines still had cotton on the reels, and one could see shrouds of every description for the deceased’s family to select from, depending on their former interests/hobbies – e.g. materials in the colours of Aston Villa Football Club were still on the cut-out table.

After a long discussion with Ms Green, negotiations began, to turn the building into a ‘museum’ with enough workspace created ‘to let’ to help finance the project.

The Conservation Committee included representatives from The Birmingham Civic Society, The Victorian Society, the 20th Century Society, the JQA, top COB Conservation Officers, and other conservation-conscious people. English Heritage became particularly interested and immediately added the building for Grade II Listing under the Jewellery Quarter Conservation and Management Plan to protect the building from demolition, or inappropriate use. 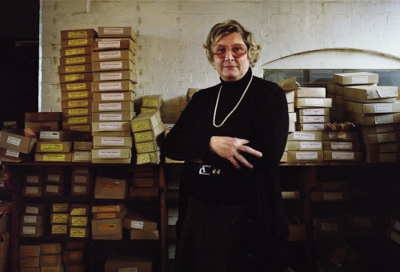 Ms Green was thrilled with the ideas being put forward and it is a great pity that she died in 2009 before the project was completed.

The project was funded by English Heritage, Heritage Lottery Funding, Birmingham City Council, plus many more organisations, and is now managed by Birmingham Conservation Trust.

Fantastic News for the Coffin Works
‘The Birmingham Conservation Trust has just been awarded a grant of £999,400 by the Heritage Lottery Fund. Elizabeth Perkins tells us: “After ten years of massive effort this is a huge step forward for the project and we have exciting plans, but first of all I want to acknowledge your support.’

Award Winning
In May 2015 the Newman Coffin Works were awarded the RICS West Midlands award in the category ‘Building, Conservation & Tourism & Leisure’.