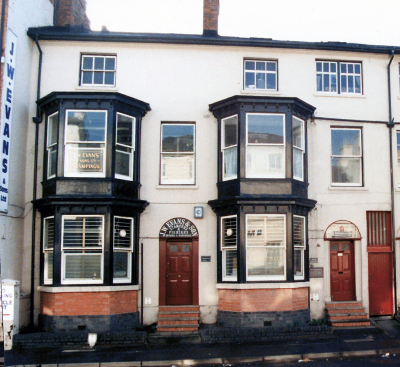 An extraordinary piece of Britain’s industrial heritage has been saved from dereliction by English Heritage taking the unusual step of acquiring it for the nation. JW Evans in Albion Street, a family silverware and plate manufactory at the heart of Birmingham’s Jewellery Quarter, will now be restored so that future generations can understand and appreciate a vitally important element of our industrial past.

JW Evans is a unique, living record of a trade that once made Birmingham, and indeed Great Britain, famous throughout the world. Run by the same family since the 1880s until the present day, its premises – tucked in behind an ordinary terrace of Victorian houses – is complete with equipment, tools, dies, pattern books, wage books, inventories, and accounts. It made the silver tableware that graced the dining tables of the Empire.

In 2007, the present owner, Mr Tony Evans, decided finally to retire and was faced with either selling to a developer, or standing by and seeing the building and its contents ruined by decay.

Then, in March this year, English Heritage stepped in and took the very unusual step of buying the property outright, as a last resort, to save it and ensure that the building and its contents remain together.

Initial work will focus on urgent repairs, such as to the leaking roofs. English Heritage will then embark on a longer term plan to secure the structure of the building and its contents for future generations to enjoy.

Mr Tony Evans said: “JW Evans produced high quality silver tableware which was marketed in the UK and all over the world. I am delighted by the outcome. It will be a good monument to the silverware industry in Birmingham.”

Dr Simon Thurley, Chief Executive of English Heritage, said: “English Heritage exists to ensure future generations can enjoy, appreciate and experience our history. We have stepped in to save JW Evans because it is one of the most important Victorian and Edwardian manufactories in existence. Its loss would not just be for Birmingham but for the world. We now need to secure its long term future both as a business and as somewhere people can learn about the source of goods with which Birmingham supplied the Empire.”

Clive Dutton, Director of Planning and Regeneration at Birmingham City Council, said: “We are delighted that English Heritage has acquired Evans Silversmiths, demonstrating yet again their commitment to protecting and regenerating the Jewellery Quarter. Their commitment builds further upon the great work already underway to preserve and enhance the area, which culminates in our current bid to have it listed as a World Heritage Site. We look forward to working with English Heritage and other partners to ensure that the Quarter is increasingly recognised for its international significance in maintaining traditional skills, whilst also being the home of cutting edge modern design and craftsmanship.”